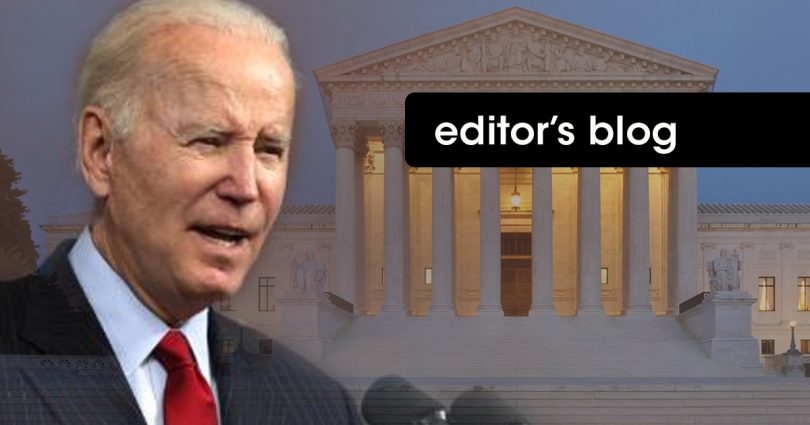 As the Supreme Court listens to arguments in Dobbs v. Jackson Women’s Health Organization, the elected leader of our country—who claims to be Catholic—has stated: “I support Roe v. Wade, I think it’s a rational position to take, and I continue to support it.”

If this doesn’t make you extremely angry, I don’t know what will.

How can a Catholic refer to the killing of a tiny preborn baby as a “rational position”?

It’s almost too bizarre to imagine, especially as we know that rational means
“based on facts or reason.”

There is nothing rational about killing a defenseless child.

Embryologists and embryology textbooks teach the truth: A separate and unique human being is created the moment the sperm fertilizes the egg. This tiny baby has his own DNA, and from the very first day he’s created, he grows at a phenomenal rate. It’s truly amazing!

This baby is not part of his mother. He is not a blob of tissue. He is a child.

Former abortionists teach this truth also. There are too many to count, but these men and women include Bernard Nathanson, Anthony Levatino, and Kathi Aultman. They saw the horrors of abortion firsthand, as they participated in it. Their misguided beliefs taught them that killing babies was a “good” and that it helped women. But when they finally opened their eyes and allowed themselves to see that, not only does abortion always kill a baby, but it actually hurts women, they became prominent speakers of the truth. And they want you to know the horrors that they saw.

In fact, Levatino described that horror for a House Judiciary Committee:

A D&E [dilation and evacuation] procedure is a blind abortion. So, picture yourself introducing this [the Sopher clamp] and grabbing anything you can blindly, and pull. And I do mean hard. And out pops a leg about that big [he holds up his fingers to indicate about 3 inches] which you put down on the table next to you. Reach in again. Pull again. Pull out an arm about the same length, which you put down on the table next to you. And use this instrument again and again to tear out the spine, the intestines, the heart, and lungs. A head in a baby that size is about the size of a large plum. You can’t see it. . . . You know you did it right if you crush down on the instrument and white material runs out of the cervix. That was the baby’s brains. Then you can pull out skull pieces.

If this sounds like a rational position to you, I encourage you to really think about what happens in an abortion. Watch Levatino’s whole testimony. Then watch videos of preborn babies moving around in the womb. Watch them suck their thumbs, kick, and move their arms. There’s no denying that this human being exists. There’s no denying his beauty and his humanity.

And then I encourage you to look at pictures of an aborted baby’s broken and torn-apart body. Did you know that the abortionist has to assemble the baby’s body parts like a jigsaw puzzle if he is too big to remove in one piece?

These pictures are gruesome, but gruesome is the reality of abortion.

They want women to feel attacked by those who care about her and her baby. They want women to deny science (but only in this instance). They stir people up, create angst and anger, and do anything but promote a world where rational thought prevails. Further, they want to ensure that women remain beholden to a society that devalues human beings and that teaches that killing a baby is a “right.”

If women (and men) didn’t stay bound to this belief, how would these organizations make any money?

But rational thought tells us this belief is wrong. Rational thought demands that we look at the facts. And, though often obfuscated by the media, the facts are there staring us in the face.

So regardless of what the leader of the free world claims and regardless of the skewed picture the media paints, we all have the responsibility to take a good, hard look at the facts and make the only true rational decision. Abortion is wrong because it kills a child. It’s that simple.