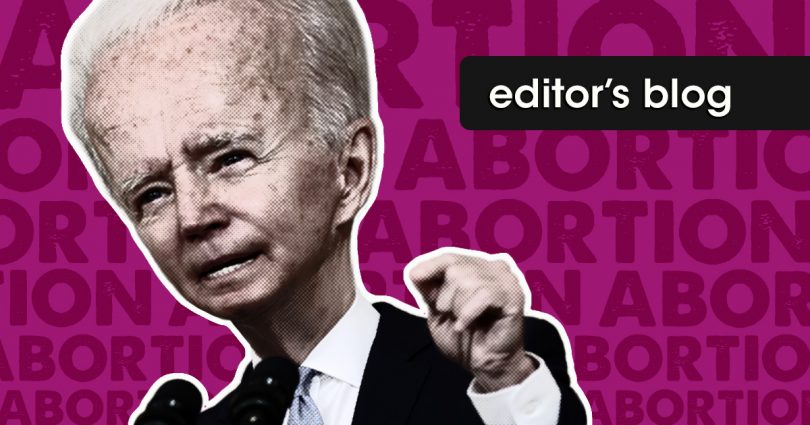 The Texas law in question is the Texas Heartbeat Act, which “requires doctors to check for a fetal heartbeat before performing an abortion. If a heartbeat is detected—which can be as early as six weeks into pregnancy—the law prohibits abortions except in medical emergencies.”

It’s a flawed law, as babies whose heartbeats cannot be detected are still allowed to be killed. Because it does not protect all babies, we cannot support it. But as we read deeper into the article, we become even more disturbed than we were at first glance of the headline. According to the article, “President Joe Biden called the law ‘an unprecedented assault on a woman’s constitutional rights,’ and promised a ‘whole-of-government’ effort to maintain abortion in Texas.”

This is our Catholic president. And he’s pledging a “whole-of-government” effort to kill babies. Not to protect people. Not to decrease violence. Not to improve our infrastructure. Not to eliminate poverty or raise people up. Not to promote unity in our divided country. Not to foster love. But to kill babies and further the disdain for them.

It’s sick, and it’s sad that this is his focus in a country so deeply hurting.

As one of my sons said when he was just eight years old: “You cannot be Catholic and for abortion.”

Since the law has taken effect, we have heard a tremendous uproar from pro-aborts. I will not link to or give any more press to the people who have been spitting vitriol at pro-lifers, but suffice it to say that talk show hosts and guests, movie stars, journalists, and even random people on Facebook have only nasty things to say about the law. They can’t fathom why pro-lifers want to “take away the Constitutional rights” of a woman to kill her baby. They call laws like this draconian and liken our times to Medieval times.

We live in a sad, sad world.

Despite the erroneous Roe v. Wade decision that manufactured a “right” to abortion under the right to privacy in sexual matters created by SCOTUS in the Griswold decision—and found that right in the emanations from the penumbra of the Constitution—there is no actual right to abortion in the Constitution. No human being has the right to take the life of another innocent human being.

And yes, the growing baby inside the mother is a human being. It’s not simply our morality and faith that tell us this. It’s science!

Pro-aborts either don’t know this, or they know and just don’t care. Either way, it’s a travesty and an injustice.

But take heart, and don’t let them drive you to despair. We cannot allow our president and all the other pro-aborts get us down. We cannot permit their hatred, their contempt, and their scorn to sway us from what we know is right.

So remain strong and steadfast, do the work God calls you to, and remember the words of Christ in the Gospel of Matthew: “Love your enemies, and pray for those who persecute you.”

God will sort this out. We just need to trust in Him. Until He does, our job on Earth is to pray and to evangelize whenever we can. We teach the truth. We contact our bishops and ask them to speak the truth about the sanctity of human beings and the disparity between Catholic teaching and President Biden’s “Catholicism.” We raise our children to respect all human beings. We refuse to sit quietly when people make cruel comments. We pray diligently. And we remember that we pro-lifers are bound together in this common goal. We weather the good and the bad together.

As Fr. Mike Schmitz recently said in his Bible in a Year podcast, “Joy shared is multiplied. Grief shared is divided.”

We all stand as one, and together we withstand the good and the bad. So let us never waver from our common goal—to protect all innocent babies from the scourge of abortion.