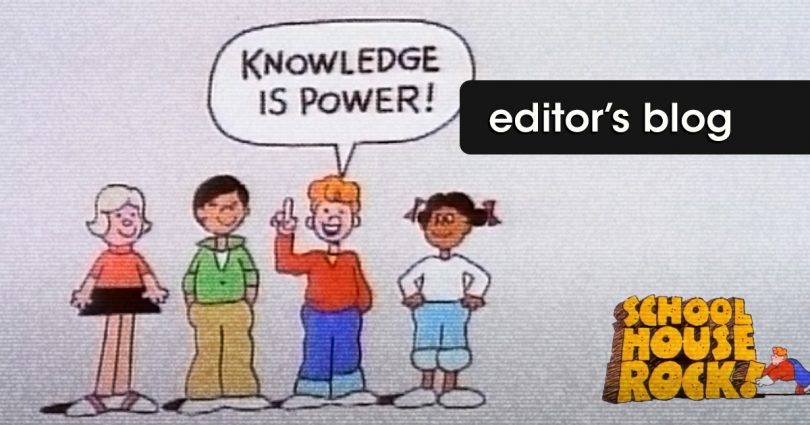 When I was a little girl, the most exciting part of Saturday mornings was when the Schoolhouse Rock videos would air. These cartoon musical videos teach kids a range of information—from history to math to grammar skills to science. Something about them was so fun! The intro to each video begins with the same short song that tells us that “it’s great to learn because knowledge is power.”

Indeed, knowledge is power. I’ve been thinking about that fact a lot this week.

Last week, pro-lifers marched in DC for the 49th annual March for Life. This sad day commemorates the day the Supreme Court decriminalized abortion. Since then, over 63 million babies have been killed in abortion—more in IVF treatments and with hormonal birth control.

Yet, as pro-lifers gathered in solidarity, other groups gathered for more nefarious reasons.

In DC the night before the March for Life, a group calling itself Catholics for Choice projected phrases—including “Pro-choice Catholics, you are not alone”—on the outside of the Basilica of the National Shrine of the Immaculate Conception.

Ashley Wilson, Catholics for Choice’s director of communications and strategy, tweeted her flawed reasoning behind this display:

I know that my faith teaches Catholics to honor personal conscience. And yet, the Catholic hierarchy seeks to polarize pro-choice Catholics and villainize people who make the moral choice to have abortions.

I am tired of feeling shame and stigma for being a pro-choice Catholic. And I’m not here for people to judge my own personal relationship with God.

This is when I was reminded of the “knowledge is power” phrase, for you see, if Wilson truly understood the tenets of our faith, she would know that our faith does not teach that we can honor personal conscience in the matter of abortion. Nor is having an abortion a “moral choice.”

The 5th Commandment tells us that we are not to take the life of a human being. The Catechism of the Catholic Church teaches that “human life is sacred because from its beginning it involves the creative action of God and it remains for ever in a special relationship with the Creator, who is its sole end. God alone is the Lord of life from its beginning until its end: no one can under any circumstance claim for himself the right directly to destroy an innocent human being.”

There is no compromise. And it’s not a matter of conscience.

Furthermore, when she said “I’m not here for people to judge my own personal relationship with God,” what she really means is that she’s projecting her wishes and desires on God rather than doing His will and following His commands. God does not have different commands for each person. The murder of an innocent child is not wrong for one person and right for another. It is always wrong.

And then we see the same kind of antics in New York where, this past weekend, there was a respect life Mass at St. Patrick’s Cathedral. During the Mass, abortion activists stood outside yelling and making noise. They then screamed obscenities as families left Mass. They chanted “abortion is a human right” and projected words onto the cathedral, including “God loves abortion.”

We know that it’s absurd to think that God loves abortion. There is no logic in that statement, for God is love and goodness. He could never love something evil. While that group likely chose those words to incite anger, we must realize that it’s okay to feel anger at attacks like this. It’s important to learn about these kinds of events because burying our heads in the sand will not create a culture of life. It’s important to learn about them because knowledge is power. And when we then act on that knowledge, we can effect change.

How do we do that?

We pray, we teach our children, we write letters, we stand in front of abortion facilities, we speak out, we support the pro-life movement and women in crisis pregnancies. We use the gifts God gave us to protect His children. We stop worrying about what “friends” on social media will think if we post a pro-life meme. We stop worrying that we’ll offend someone by speaking up for the sanctity of life. We proudly stand up and assertively but respectfully teach that all human beings, from creation until death, deserve protection and that wayward Catholics—even the one in the Oval Office—who fight for abortion “rights” are wrong.

When my now-20-year-old was just seven years old, we were listening to a Catholic radio program in the car. He piped up from the back seat and said: “Mommy, you can’t be Catholic and for abortion.”

Let us work every day to impart the knowledge that abortion is wrong.