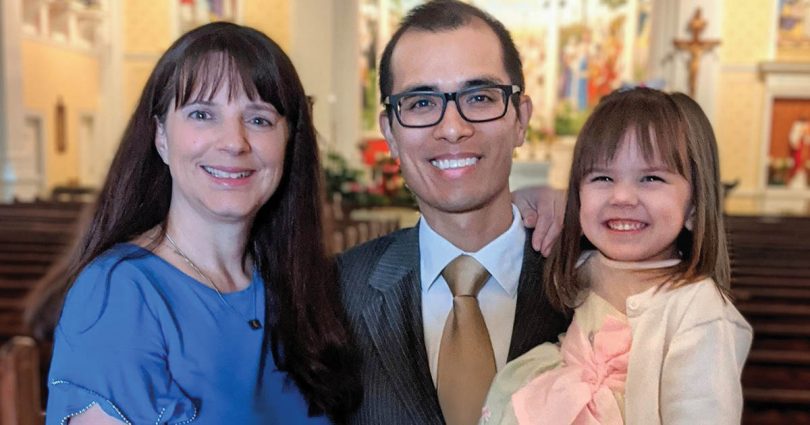 Like most newly married Catholic couples, Connie and Erick Custodio dreamed of beginning a family. They wondered what their children would look like and looked forward to filling their home with giggles and fun. They envisioned homeschooling, teaching their little ones about the faith, and preparing them to receive the sacraments. However, neither was ready for the shocking news of infertility.

Throughout her life, Connie had been incorrectly diagnosed with having difficult and painful menstrual cycles, but doctors never indicated anything more serious. After five years of marriage without conceiving a child, the couple sought medical help.

“Unfortunately, the poor handling of her issues by physicians continued,” explained Erick, an associate professor of computer science at Belmont Abbey College in North Carolina. “The doctors couldn’t understand why we wanted so badly to have children and why we didn’t agree with artificial means of conceiving.”

The medical issues continued with a surgeon removing one of Connie’s fallopian tubes without consent. Another incorrectly diagnosed her with lupus. Meanwhile, her condition worsened, with vomiting now accompanying her monthly pain.

Thankfully, the couple learned of Dr. Thomas Hilgers with the Saint Paul VI Institute for the Study of Human Reproduction. They began praying for an answer.

Dr. Hilgers is the founder and director of the Saint Paul VI Institute and the National Center for Women’s Health in Omaha, Nebraska. In response to Pope Paul VI’s 1968 encyclical Humanae Vitae, Dr. Hilgers began research in reproductive healthcare that fully respects human life. At the institute, he developed a new approach to women’s healthcare, offering treatments to women while challenging mainstream medicine, contraception, in vitro fertilization, and abortion.

NaProTechnology is a woman’s health science that works cooperatively with a woman’s fertility and menstrual cycle. It relies on the Creighton Model FertilityCare System, which monitors the naturally occurring phases of a woman’s fertile and infertile times. CrMS includes observing and charting biological markers essential to a woman’s gynecological and reproductive health. This information can be interpreted by a woman and by specifically trained physicians, who can then diagnose and hopefully solve her problems.

“It turned out that there was a Catholic doctor who studied with Dr. Hilgers and just recently started her practice where we lived in Southern California,” said Erick. “Connie started seeing Dr. Teresa Stigen, who was able to diagnose her with endometriosis, but after several attempts to treat her with NaPro she recommended that Connie see Dr. Hilgers himself.”

At the time, Erick ran his own computer consulting business and did not have insurance that would cover visits to the institute in Nebraska. So Erick sought his previous hourly position as a computer trainer at an Apple store; they rehired him and fully reinstated his family health insurance plan.

“God was showing us He was taking care of us,” Erick said. “In Nebraska, Connie was found to have a major bowel obstruction due to the endometriosis. She underwent a procedure that painstakingly removed every bit of endometriosis, untangled her intestines, and even resectioned her intestine. While in the recovery room, numerous doctors came to marvel at a patient who should have died in the condition she arrived in.”

After Connie recovered, she and Erick planned to pursue having children, but Dr. Stigen could not bring back her fertility. A year later, and after two years of medical treatment, doctors told Connie she was in premature menopause. Angry and disappointed, the couple spent a year mourning the loss of the children they would never create.

For women experiencing a surprise pregnancy, giving a baby up for adoption is a loving gift to both the child and the adoptive parents. Plus, it offers peace of mind to the mother, who can even choose to have an open or semi-open adoption so that she can watch her child grow.

But with adoptions ranging from $30,000 to $50,000, the prospect seemed out of reach. Therefore, the Custodios elected to become foster parents, knowing that adopting through the program would be more feasible.

Even though they were aware that foster agencies prioritize reunification of children with their biological families over adoption by foster parents, they opted to take the risk.

“Then the call came. The social worker called this a ‘home run’ case,” explained Connie. “The mother abandoned the baby shortly after delivering her. The worker told us that the birth mother’s parents were not in a suitable position to adopt the baby due to health conditions and advanced age.”

Connie and Erick were ecstatic! They brought this little girl—Arabelle—to their home and began dealing with a roller coaster of health issues related to the infant’s diagnosis of “failure to thrive.” For months they tirelessly worked to keep Arabelle healthy as they looked forward to making her their own.

However, when they went to their first court adoption hearing, the grandparents asserted their rights, and Arabelle went to live with them.

The Custodios are not the only couple to endure the anguish of a failed adoption. According to the Gladney Center for Adoption website, the top two barriers to a successful adoption are finances and the heartbreak of losing a child to a biological family. Other barriers include the enormous amount of paperwork required, a higher percentage of prospective parents to a low number of available babies, lengthy waiting periods, and failed matches between birth mothers and adoptive parents.

This time, they nearly adopted a baby boy. But once again, Connie and Erick endured heartache, as the birth mother became disenchanted with the attorney and disappeared.

Not knowing what to do next, the couple marketed themselves on an adoption website and shared their story, hoping to find a child to adopt. After months of disappointment, they canceled their account and resumed searching for an adoption attorney.

Ironically, just after they withdrew their website account, a woman began searching for them in the hopes that they would adopt her daughter’s baby. She had heard from a mutual friend of the couple’s desire to adopt.

Planning to homeschool her future children, Connie had joined a network of homeschooling mothers in their county. Not finding the online profile on the adoption site, this woman found them on the homeschooling group and reached out. She explained that her daughter was in the Navy, stationed in Virginia, and hoped that Connie and Erick would adopt her baby girl.

“Her conditions were that we were practicing Catholics, had no other children, and lived in California, which we did then,” said Connie. “After what felt like a dream and an eternity, we found ourselves on a plane from Virginia with little Liana.”

Liana is now four, and Erick and Connie have tried to adopt another child since 2018. Because the couple adopted Liana through Catholic Charities in Virginia, they contacted the branch there but learned they are ineligible since they are not Virginia residents.

Frustrated, the Custodios, who now live in North Carolina, created a YouTube video marketing themselves, hoping that a struggling mother in a surprise pregnancy or with a young child she’s unable to raise will consider them as prospective parents. After several friends saw the video, they were shocked at the cost of adoptions and started a GoFundMe page to help pay for the adoption costs.

The Custodios desperately want another child, not just because they desire a child, but because they understand that there are so many children in need.

Indeed, the statistics are staggering. According to the Congressional Coalition on Adoption Institute and the Adoption Network:

The Custodios want others to learn from their struggles and joys. And they urge patience and prayer to prospective parents while waiting for a child.

“I think the best advice to give other adoptive couples would be to be prayerful and peaceful in this journey. . . . [Just] hang in there and know it’ll all work out in God’s timing,” said Connie. “Riding the roller coaster with its ups and downs is so worth being able to have your baby placed in your arms. To feel the instant love that you have for your baby can’t touch any words that I can explain.”

Most of all, the couple wants you to know that, if you dream of having a child, educate yourself on the process, pray, and don’t give up. Whether it is through foster care or an adoption agency, having a child of your own is possible. It may just take some time.